It became my lifesaver when first left teaching and tried to get back into my creative writing goals. One of the awesome things about being able to talk to so many different people in any digital community is that it helps you understand yourself.

You may not experience something personally. But, you may talk to someone from a different country who has. You learn something new and it can inspire you to want to be better because you are more aware. However, if you can understand different perspectives about the same thing, and you are still convinced of your own values (after honestly considering the others), that is what you truly believe. The opposition is key. And, that’s exactly what “Pixar representatives” emphasize.

This first part of the writing series is designed to help you find ideas through your character’s conflicts (and eventual plot) that help him/her evolve into a better person. 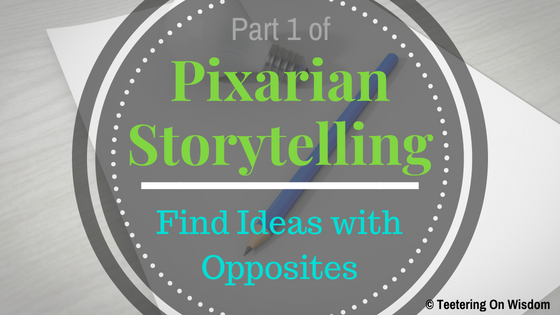 Below is a video by Bloop Animation that takes a few of those “rules” from the original 22, and examines their use in various Pixar movies. It’s best that you watch it before you continue on below; it will all make much more sense if you do.

In the video, the narrator constantly emphasizes aphorism #6: Polar Opposites

This can make a lot of sense. Conflict and hardship are what motivates living creatures to progress. Think about civilization adapting to deal with increased needs; or how creatures have to evolve to battle the obstacles of their survival. Organisms truly develop when our status quo is broken.

In my story, the girl is satisfied with her Christian life. She has a plan based on her notions of how to be a good woman for a Godly man to come. Well, instead of a human-angel, she is intercepted by a human-demon–literally. A polar opposite of everything she believes! Challenge accepted… This forces her to reconsider what a “good man” may be and whether it is okay to love someone who falls short. How does she deal? With an existential crisis–the conflict that drives the plot.

The obstacles a character has to overcome is what really develops who (s)he is–potentially making him/her likable. However, it’s not just about being likable. You don’t want your character to progress too easily through the obstacles. But you don’t want to make it too hard. Make it so complicated that it feels impossible. It is the character’s willingness to take it head on that makes him/her respectable.

This is when tip #1 comes into play: admiring attempts.

When a child is trying to learn something, it’s important to show praise and support when (s)he tries to learn, whether (s)he accomplishes it or not. Progress as a person is way more important than accomplishment as a person; in fact, focusing on perfection like that can actually be detrimental according to Stanford Psychology professor Carol S. Dweck.

In my story, the antagonist is trying his hardest to ruin the protagonist with mindless lust. So far, he’s kidnapped her, seduced her roommate, won a bet with her, but she keeps her head on straight. Eventually, she does break down. However, she put up an amazing fight, learning so much about herself and the world. This–even though she fails–makes her so respectable because she tries to stay true to her values. Yet, she keeps an open mind and heart. In addition to this, their journey together, as found out later, was misery needing company. He succeeds in breaking her but then hates himself. This anti-hero persona can (debatably) make him admirable in his later efforts to fix it.

Note: The decision your character makes is what makes or breaks our connection with him/her.

If you come to a stand-still while brainstorming these, as most of us writers do, or, you need some ideas on possible reactions for how your character can deal with this,

you can think about tip #2: writer and audience interests.

However, to do it requires a little introspection…

While some authors like to read/watch what they write, others don’t. I’m not gonna lie: I could never write a horror/suspense/mystery, but I watch and read them like crazy. As an English teacher, I’m expected to know great literature. Really, I’ve read more sleazy, cliche Harlequin Romances with hot men (with the pecks, unbuttoned shirts, great tan, and pelvic V visible–so delicious) and virginal women (despite being the hottest chick on the block) who are carried away into the sunset to birth children by a guy who can give them the life they never knew was possible (so jealous) than I have classics that most read as children! This brings in an interesting dynamic that requires you really think about who your audience will be.

Check out the other posts of the series for more background and techniques for effective storytelling, “according to Pixar”. Click-y below. 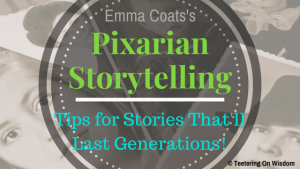 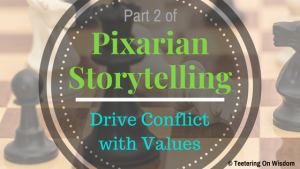 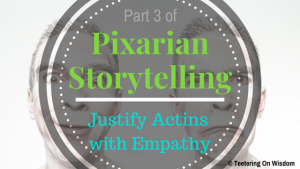 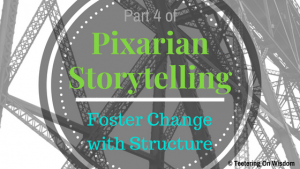 So, what do you think about these writing steps and tips? From me, and “from Pixar”. Are they helping? Let me know in the comments below. While you’re there, connect and share with me on social media, and sign up for some weekly wisdom!