To the Novice Writer: Advice from the published and not

When I need writing advice, it was instinctual for me to seek those posts about advice from published authors, or buy books like Stephen King’s On Writing. If anyone knows good writing, it’s them, right? Well, I found in my writing communities that there were plenty of writers who said all the same things that the pros said, but they weren’t published. Hmmm… Published or not, good writing is good writing. And, those who have written long enough and serious enough will know good writing. Period.

There are many novice writers who ask for advice in our communities, so I wanted to compile some advice from the published and unpublished writers of my Writers’ Coffeehouse. 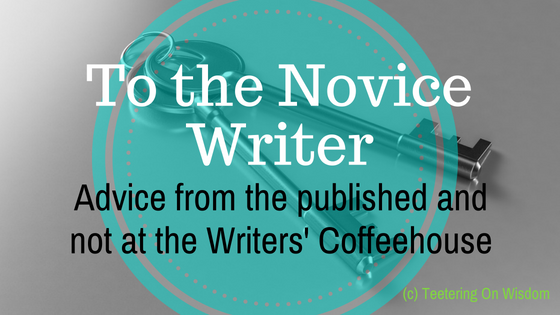 “Set aside a time to write in your schedule then guard it fiercely. That is your time and it is important! Try not to let life interfere.

During that time you are to write! Not surf the net, post on FB, or whatever! Write! It will not always be great writing. There will be days when it isn’t even good. Who cares? Write! Stick with it and your story will be told.

“Go back and study grammar and punctuation.”

“Edit. Several times. Hire an editor who does content and line at a minimum. And don’t show your first draft to anyone. Lol!”

“Sell your television, or at least terminate your satellite or cable, and read, read, read.”

“1. Respect your readers and yourself. Edit, edit, edit. Format the book. Invest in a good cover and no – not on power point or a home made picture. If you want to be taken seriously, take your readers seriously. Beyond the reading, what the eye sees is important. And I’ve seen many readers complain that they won’t touch a book because the cover is boring and the book looks like it wasn’t formatted at all. Note – that doesn’t mean you need to hire someone. Not at all. We, for instance, format on InDesign. Took us a looooooong excruciating time but we did it. InDesign is used by traditional publishers as well. Oh and don’t sell yourself cheap. Price the book correctly according to your genre and don’t push it too. A short book can’t be sold for a high price. If you want to be seen as a serious author, treat yourself as a serious author.

2. Don’t run. Walk. Learn your market, your genre, the industry. Learn how things work and start slow. Trust me you’ll be happier and you’ll make less mistakes. Listen to other people’s advice and grow a thick skin. Develop the instincts you need to know what’s right for YOUR book.”

“My advi[c]e to you is to read,  listen and observe more than you write.”

When you hear/see it, it almost feels like common sense. Like, yes, a writer should read…And yet, there are so many writers who don’t. It’s worth reiterating time and again, and these writers have all been in the writer arena, charging writing obstacles with their pens and pencils like the writing gladiators they’ve practiced to be.

It’s not measured by book sells–Fifty Shades of Grey proved that. It’s not measured by agent acceptance–Twilight made that clear. Nor is it necessarily even measured by critic reviews. Good writing is measured by the writer and reader, understanding one another and bonding in a unique way. When your book moves a reader to think and feel about what you’ve written–that’s good writing. And with the tips above, you can accomplish that type of writing like they have.

Get going, and don’t stop.