Before you start this plot and structure installment in my Pixarian series, I suggest you read the introduction post.

When something goes wrong in your life, just yell ‘Plot Twist!’, and move on.

I’m starting to seeing this over and over on Pinterest, and I’m pretty sure it’s the best way to deal with life. Plot twist: when everything you were expecting suddenly gets flipped on its head and your expectations are twisted.

Everything you worked for, all you had planned out in your life, then something goes wrong. It wasn’t what you wanted, what you expected, but guess what, it happened. What’s lovely about applying the plot twist technique to your own life is you know that it will be followed by a resolution that ties up those loose ends and works out.

No, I’m not talking about your death. Our life is a complicated story of multiple subplots, expositions, climaxes, and naturally, resolutions. Don’t worry, it’ll all work out.

Some writers suggest to let your characters walk you through their stories, their lives. But, for most of us, life has too many subplots to include them all in one book. You have to pick and choose. But, to do so, you want to know your end goal so you can properly structure how to get there. Maybe even change things up.

Pixar makes this same point, plus more, and that’s what I’ll address in this post.

Let’s think about how we can change our characters for better or worse by mixing up their world. 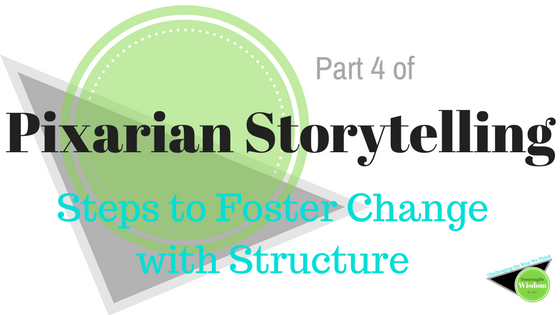 Anything well-organized always starts with the end in mind before we even have the beginning. That’s why Emma Coat’s suggestion makes so much sense: 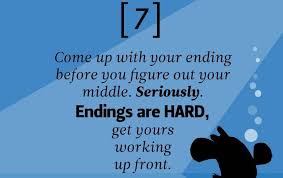 Tip #7: Begin with the End before the Middle

Nothing is worse than getting in the car to go eat, then, pulling out of the neighborhood, you ask everyone in the car what they want and none of them know. Well, you can ask Siri or Google, but then you have to look at the screen to choose, see the distance, see the price, check reviews, images, and reviews. But, you’re driving. Yeah, not good. Before you even un-park, you need to know where you want to end up.

We do the same thing in teaching. Before we can figure out what we are going to teach each day, we have to know what we want students to learn by the end. Backward Design. The same goes with any story. In the end, what do you want to happen, where do you want your characters to end?

But, what if I don’t know the end yet? I’m barely getting the beginning down???

It’s cool. You can still get as close to the end as possible if you’ve been looking at the characterization and conflict brainstorming in the previous posts.

While this may not be the concrete ending of your story, it gives you a direction and goal for which to aim. Yup, it’s that simple. That’s the thing about prewriting and outlining: nothing is set in stone, only drawn in the dirt beside it. This ending may change, you may have multiple endings and climaxes, needing multiple books (series). It can go so many directions, but, at least you have a destination. The rest of the writing is about the pit stops along the ride.

When it comes to those blanks you need to fill, “Pixar” has your back, yet again. In the following Bloop Animation video, the narrator looks at the 6 part outline suggested by Emma Coats, and applicable to the Pixar movies.

So, all the Pixar movies I love fit in those 6 blanks?

Apparently; sorry to break it to you. For Pixar fans, this is probably a little hard to believe (until you try it). For writers, it means you can do it! If you can fill in these 6 blanks, your stories can be as awesome as Pixar stories. But, thinking about plot structure, there are still some things you need to do.

Your ability to effectively structure this story is your ability to make or break your character. When you’re writing a story, you’re not just organizing a conflict along a plot, you’re improving or ruining a life. A fictional one, yeah. But, if you remember the last post—

this character is a small piece of ourselves–a person taking on what we can’t.

As your character lives your designed plot, (s)he is changing–for better or worse. Make the journey a tumultuous one, but with bars along the edge for balance. It is only through adversity that we come out better than we could have ever been.

Dang, I’m always so philosophical when I write about writing! Well, my English degree makes sense in these moments! How about you? Are these tips and explanations helping you to connect to and understand better your character and story? Are you making headway in your story, or are you regretting every decision you’ve made in your life at this point? >.<

Comment on it below, and share the love via social media. Don’t forget about the Weekly Wisdom Newsletter every Saturday–sign up! Check out the other posts, as well. 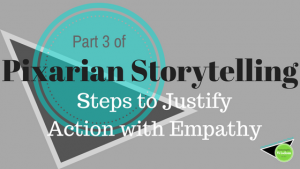