Common Errors to Correct When Editing Your Draft: Shifting Tense

In the last part of this topic, I triggered nightmares from your grammar drills in primary school. Sorry for that, but it had to be done. While I’m sure it’s something you hoped to never relive, it’s the sacrifices of being a writer. Hopefully, you’ll find this installment less traumatic, yet just as important as the last.

As I mentioned before: novice and professional writers tend to make the same mistakes in their early story drafts.

But, the difference in their writing quality comes from the professional’s ability to identify and correct those errors. That doesn’t mean the novice is doomed to mediocrity. There are ways to easily identify these errors and make sure your writing style and mechanics are consistent through your story.

This next problem is fairly easy to pick up and correct; but, it’s way more time-consuming to correct. No, “find and replace” will not completely fix this one. I’ve tried. Now, let’s dive in, shall we? 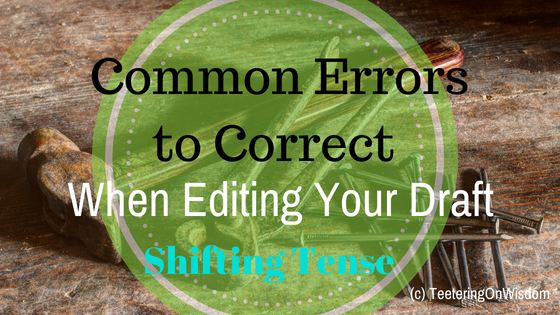 For the sake of simplicity, tense is the time reference in relation to current speaking/writing. It’s the basics of almost all languages; in order to conjugate a word, you have to know tense.

For the parents out there, we enjoy when kids start learning this in school because you get things like “runned”. So darling.

It’s not-so-enjoyable, though, when we have to fix it in our writing. It’s not because one tense is easier to write than another, it’s more just because our time is constantly shifting, we naturally shift when referring to it. Unfortunately, though, the inconsistency can eventually become confusing.

So, let’s look at the basic three.

Present tense is always what you’re taught first. We tend to perceive our present better than any other time frame because it’s real, right now. With present tense, the action/state is currently happening/relevant—almost simultaneously—during your current speaking/writing.

The guy winks at the girl with all the wrong intentions.

This action is reported as it’s happening. It’s not already past or to happen later. The writer/speaker is mentioning it upon occurrence.

Now, there is a trick to see if you’re writing in present tense. Though it’s not the case every time, it works much of the time. Notice the “s” at the verb ending–that indicates present tense. That’s the first way little ones learn to use and identify it. It’s not until third grade or so that everything they learned is shattered with words that don’t follow that rule. But, generally, if many of your verbs have an “s” at the end—or no conjugation at all (i.e. -ed, -ing, etc)—you’re writing in present tense.

I would say past tense is the most frequently used tense in all four of its forms. It’s probably because we are surer of the past, considering it already happened. With past tense, the action/state formerly happened—just recently or further back—in contrast to your current speaking/writing.

The guy winked at the girl with all the wrong intentions.

This action is reported after it happened. The writer/speaker observed/experienced it, then reported it some time afterward. The occurrence/happening and its report are not happening simultaneously.

For most words, you can tell you’re using past tense because it’ll have -ed at the end. Now, there are many exceptions to that conjugation that change the word to reflect a tense change. That’s when we get the cute “runned” instead of “ran” from little ones! If you notice a lot of -ed on the page–in general, as not every word will have the suffix–then you’re predominantly writing in past tense.

Other than “planning” something, we don’t really use future tense a lot. Really, other than in dialogue, it seems too obscure to use in normal writing content–creative or technically. With future tense, the action/state has yet to occur/exist during your current speaking/writing.

The guy figured he would wink at the girl with all the wrong intentions.

This action is reported before it’s happening. It’s not currently happening or past. The writer/speaker is mentioning it with the assumption/plan it will occur.

Trying to identify future tense is more complicated, other than it seeming naturally out of place if you shifted to it from past or present tense. I can’t even begin to simplify future tense; you have to get into the state of being and modifiers and all kinds of technical things I struggled with during my degree when I studied and took notes on pure language rules for 90 minutes twice a week for five months. On the upside, though, from what I notice, people rarely shift into future tense randomly.

Look, that’s the best I can offer. Sorry.

Moral of the story…

As writers, we have a tendency to change up how we refer to time as we progress through our work. Nevertheless, we should avoid and correct this habit before publication. If you start your story in present tense, the whole story should be happening as the reader reads, as the writer writes. If the story starts presently and slips into the past, you need to decide which is better for your story development and make all the scenes consistent in reference of time.

Obviously, there are exceptions to time shifting, like flashbacks and dialogue. But, as far as the main content, you need to stick with one. I know, I know, it’s a pain to go back and change all that; but, you gotta do what you gotta do to ensure your writing is understood how you intend it to be.

I can’t tell you which tense is better.

Really, it depends on how you want to audience to experience the story, the POV in which you write, and other factors. I notice that first person is commonly in the present tense, while third is in the past. However, for me, I always write in the past tense. Why? No idea. Is it better than when I write something in present tense? No. I think it’s just me being lazier because it takes more brain-power for me to write in present tense. To each writer his/her own. *Shrugs shoulders*

Anyway, the sooner you cut this habit, the easier your editing process will be, and the better your writing. It’s worth it–trust me. Just like errors in the other articles in the “Common Errors” series (linked below) are worth weeding out, too. 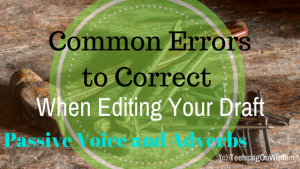 The time has come. Bust out the expresso and make it happen.