As technology expanded, so did multi and mixed media art. Along with that, it became easier to tell stories in an alternative, and many times, more engaging ways for a larger audience. Well, that also meant that what counted as a “text” and “literature” changed, too. While many still deny anything but print is literary, the reality is, a story is a story, no matter the format.

Majority of the storytellers I meet started with a traditional writing love; however, I’m starting to meet younger storytellers who got into it through alternative means. A former student of mine, Zane Indie I call him, actually honed in his writing passion through a game. I was fascinated by how he has to consider all the same things I do when writing a novel just so he can play the game.

I finally wanted to find out what these “game stories” were all about, so I interviewed him about his journey during 2.5 years playing Dungeons and Dragons. 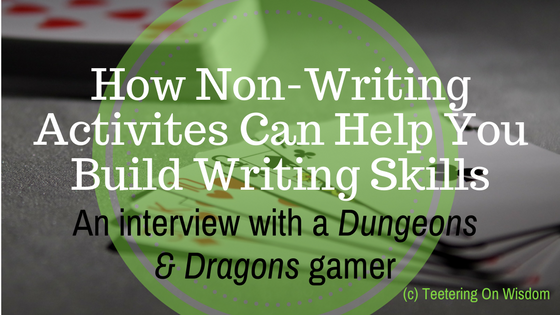 Zane is 18 years old–a baby, I know–and really found an outlet for his stress through his drawing and storytelling in association with the game he started playing with some friends.

He shared that he “always loved fantasy” and “D&D is the game where you can do anything as long as you’re imaginative….that, and I’m a nerd, so…” I had grown up hearing about the game but I was always under the impression that it was a video game like World of Warcraft. According to Zane, there’s no real technology involved in it; “it’s collective storytelling with one person telling you if you can or cannot do things.” Essentially, each level is created by one person, alternating between people. That “dungeon master”, they are called at that time, designs the whole world and adventure; and, I mean the WHOLE world; map, culture, challenge, history, story progression, species…

Sounds like my kinda game. I know, right! I would totally wanna play this if I had that kind of patience.

When I asked him how storytelling specifically applied to it

He was quick to tell me, “the entire game is completely based on it. It’s an interactive novel but leaving up all the middle pages up to the players.” While he’s responsible for creating the world and story, the story can only unfold after the other players get involved; “everyone develops their character and I tell them their adventure.”

Um, novels don’t do that; writers come up with their stories completely.

True, but there are some writers who let their “characters write their own story”. It’s an interesting concept, really; a great way to challenge a writer’s true skills at improvising. Think of it almost like free writes or sprints. How it works is, “I leave everything loose in the beginning with basic backbone so there is flexibility to fit the characters. The first time we all play, I figure out how they play, their habits, how they play the character. I have ideas that I want but I leave it very moldable so I know what to work off of when they get further into the game. I build a foundation but also let the player help me build the walls. You literally have to build the world then worry about the people later.” It feels so counter-productive.

Stories are about characters and their conflicts.

Yeah, the world affects their lives and how they live it but the character’s response to that influence is what really drives the whole thing. I actually mentioned that up to him and he brought up a good point: “making it broad helps it a lot. Sometimes making it unique and crazy is not necessary. It’s the characters who change it a lot, not the story/plot. It’s not about making everything new, it’s about making the story engaging and expansive to reach out to more. And, the characters do that.” I can see that. When you think about it, it is all about the characters, no matter who the conflict, story, or author intention. I know I’ve come up with an amazing idea and suddenly a character gets all in my protagonist’s business and inserts themselves in the story. Not to mention, I find that I change my stories a bit as they progress. So, while having an outline is excellent to get all your ideas organized, you really do have to make sure it’s still flexible. “I can make a story for three hours and the characters will destroy it in less than that–you’d be surprised!”

Oh, I’m not. It happens to me all the time. Right; #storyofmylife.

When it came to storytelling as a general craft, he did have a few suggestions from what he learned about storytelling through the game.

What are some tips you can give us about character development based on your experience with playing this game?

“Keep it real. Just keep it real. Don’t force your character into everything sometimes. A life or death experience is necessary for sometimes to realize I should stop being a dick. Sometimes, getting just a small thing can send you on a long path. Start slow and build up. You don’t need to jump into everything at once.”

What tips can you give us about world-building based on your experience with playing this game?

“Start with the world first; don’t worry about conflicts. Just worry about where shit is. Go from big scale to small scale. Start with geography. It can really help with even describing terrain and culture. Draw a map, make it as real as you can.”

What about transitions, call to action, and resolution?

“I tend to write a list of different things I can do or pick the things that are more natural and not cliche. Most times, they stumble on the creatures and they respond on their own. I call it the ‘empty-see effect’ by getting them to react on it themselves. I hate that, but sometimes it’s necessary to keep them going. But, make things obvious that makes them act and drive the story. Make it natural and stay away from cliches.”

Those aren’t all things that I can personally do considering my ideas and writing style. But, I can see those working out for novels just as much as for a game. In any case, whether you do these things or not, whether you’re designing a game, book, movie, or album, remember that storytelling is subjective. It’s also a skill, not a talent. Even Zane says “I definitely second guess myself a lot. I have a direct audience that I get criticized [from].” While we have drafts and editors and beta readers, informal gamers don’t. He has to trust that the story he creates is ready, whether it is or not.

“You definitely improve and it definitely takes an effect when they ‘read’ through the game”; but, just like he does, stay positive and try again. Have a game plan (see what I did there) but remember that, like life and literature, the story will change. It’s up to you whether you see that as good or bad, though.

Have you refined your writing skills while doing other, “non-writing” activities? Let us know below and on social media.