How to Write Dialogue: Authentic Speech

“I love when Ms. James puts us in our place in her ghetto voice.”

One of my coworkers reported hearing one of our mutual students talking about this and she thought it so funny. Yup, I was that teacher on campus. Being a minority, educated and employed outside my culture, code-switching is really important.

It’s basically when we can switch our behavior, speech, and other patterns to match our audience/situation. So, how I am with my loud, obnoxious, and ghetto family is very different from how I am with my students’ affluent parents. Well, I always felt it important to demonstrate this reality with my students and commonly reverted to a mild version of my cultural dialect with them. It amused them, but also revealed so much about me as a person that was so different than anyone they ever knew in person.

How your character behaves and speaks is really important to understand their background. Rather than giving a chunk of information about their life, you can imply it with accent, speech patterns, idioms, and such. When I read, most authors have the type of things a character says down. Some are long-winded, some rant, some never speak. But, they ignore such an amazing opportunity to emphasize how a character speaks. I’m not talking about just “tags”, either. 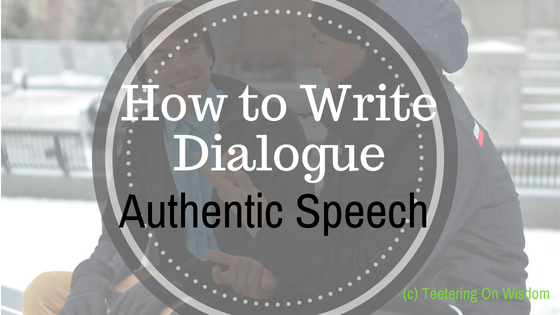 Dialect–basically, our regionally-influenced speech pronunciation–can be a huge indicator of someone’s background; where we are raised the longest is from where we pick up our strongest “accent”, thought lots of other things affect it, too. Example:

“I reckon them dah’lins is in for a good time.”

“Dem boys ain’t no better then the rest of us!”

You can easily get a general idea from where these speakers are come based on how they pronounce their words. Notice the spelling change to reflect the difference in pronunciation; dialogue is the only time “misspelling” is appropriate in your writing. Sound out, say aloud, and experiment with the best way to spell the word to help us “hear” the character speak. However, don’t overdo it. Not every word needs to change to fit speech differences. If you include too much spelling change, it breaks our reading fluency and can actually confuse us. Just like speaking to someone with a heavy accent in real life, too much can be overwhelming.

In the lines above, there is maybe one or two spelling changes to reflect the accent, but not so much as to hinder readability.

Diction–our word choice and use–tends to date and map us so easily when we speak. The idioms, allusions, slang, and jargon we use is a flag as to our generation, education, location, pop culture and many other subtle factors.

“We have to take the stairs up to the flat; the lift has been broken all week.”

“They just don’t get it, Man. Grass isn’t just an escape; its the truth.”

The words you include can really define a character’s voice. Though all these words have none or little difference in their pronunciation, the age, and other factors are as obvious as those used by certain generations, locations, and professions. Just like dialect, you don’t want so much that the reader is completely lost. It can be so easy to make the rocket scientist speak in pure science jargon; but, if your readers don’t speak science, they’re more likely to disconnect from the character and ignore anything (s)he says–which can greatly hinder character development.

Got that right, Sista!

See! One of the few times I’m glad you chipped in!

Speech patterns are much like dialect and diction in that it can help us “hear” your characters. While our speech fluency doesn’t (necessarily, though it can) indicate any background, it can greatly demonstrate our state of mind and speech quirks.

If you want to show a person is nervous, you can easily add pauses and stutters in his/her speech rather than just saying it; remember, show, don’t tell. When adding in stutters and lisps and space fillers, it can be so easy to add so much that it sounds fake. Make sure to read the speech out loud to see how real it sounds. When someone stutters, they may not stutter every word, maybe only words with ‘s’. When a person is nervous, they don’t say “um” every other word; eventually, (s)he’ll just stop speaking altogether when (s)he’s unable to think of anything right to say.

Just like dialect and diction, it’s so easy to add too much. Sometimes, it is just best to say the person stumbled or stuttered their words if they are speaking a lot in the conversation. As we get used to the character more and more, it may not even be necessary to include every speech nuance. If we know that character 1 tends to stutter a’s based on past conversations, we’ll assume it’s still a thing later when (s)he speaks, whether we see it written or not.

Tags are the descriptions we attach to dialogue (“she said”, “he asked”). There is much controversy around how to best tag dialogue. Some writers say to use action synonyms to make it more vivid: “she hissed”; some writers say to keep it simple and stay generic: “she said”.

So, which is better?

Well, keep in mind that we can’t speak certain actions. If you’re hissing, you’re not saying words, you’re making a sound. Try to say something and hiss at the same time…not working out too well, is it? Really, we can only say and ask something. Now, she can raise her voice as she says something, but she can’t really “yell” it–not effectively, at least.

Instead of just using a synonym, take the time to describe the action and sound of the speech.

“I can’t believe you just said that!” she said in a high pitch that shouldn’t even be humanly possible.

“Get out of here now,” he said with lowered brows and clenched teeth that forced the words through his teeth gaps. The air release almost sounded like an unmistakable, angry hiss.

If you have well-established who is speaking–the same two people, speech patterns, dialect, and diction–it may not even be necessary to include a “tag”; just add the action to create the scene.

“You can’t be serious.” He rubbed his eyes like it would help him hear better.

“I’m so sorry, Dad. I just– I don’t know what I was thinking. It was just, like…I don’t know.” Her gaze dropped to her lap to study her bouncing legs.

Better yet, integrate the action between the dialogue. We don’t just stay still when speaking and only move after what we’ve said.

“I’m so sorry, Dad,” she said, her gaze dropping to her lap to study her bouncing legs. “I just– I don’t know what I was thinking. It was just, like…I don’t know.” She was at a loss for words; nothing could excuse what she had done.

When creating a mood, character action is just as important as the “feeling in the air” or the smell in the room. A person who’s continuously rocking and ranting is way more indicative of the moment than just describing the bright walls of the room and idle chatter of the others in the room.

People watching is the best way to master these speech techniques.

It’s not creeping, it’s research. What better way to mimic a person’s speech than to listen to others’ speech? How do we know how a person moves when excited unless we’ve watched or seen someone behave excitedly? Dialogue is just as much a delicate craft as the rest of writing.

I, also, recommend you check out the 10 Dialogue Mistakes in Fiction that manuscript consultant Eva Langston addresses on her blog.

Remember to have fun with it all. This is a chance to really get into character and bring them to life. Each character is just as unique as any human you’ll meet in real life.