How to Student 359: What Class Grades Actually Mean

What started as a way to measure student mastery became a way to compete and beat ourselves up. But, why is that? Why do grades have to represent our failures rather than our chances for growth?

Carol S. Dweck reported a study in 2015 about growth mindset and found that adults are a little to blame. Attaching concrete adjectives to children creates a static mindset that is then reinforced by measuring tools. Meaning, when parents tell children they’re smart, they expect everything to support that. When it doesn’t, they have a bit of a crisis. Believing everything is a lie, even though it’s not. As teachers, we are guilty of this with “bright” and “smart” descriptions that set a standard for students that we destroy when we grade them. But, that is not our intentions.

Grades are not meant to “grade” who you are–though they are interpreted that way. They are meant to grade your skills so you can reflect and grow.

Before we look at what grades have ultimately become, let’s first start with what each letter means. 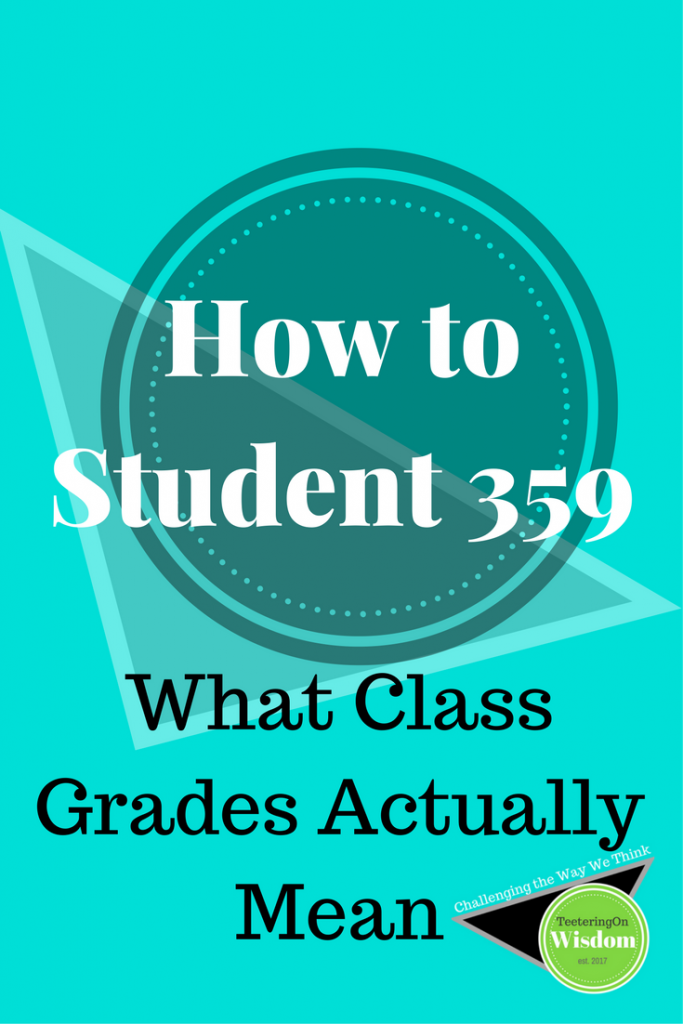 When someone is mastering, (s)he has met the standards in full and is ready for the next level of standards. For a quarter of students, this is a breeze. The second quarter of students feels it is impossible. The last half of students think it’s a goal toward which to work. Teachers tend to “ignore” students who have A’s because we are confident that they understand the work. Or, are capable of using resources to do so. When entering society, this kind of student will have a leg up on others in capability. But, that doesn’t mean that (s)he will apply it!

A-level grades are ideal. However, not having an A is not the goal of school, and is not necessary to have success. Unfortunately, having A’s opens doors to progress for some, and closes doors for others who take it for granted.

Keep in mind, A is not an invitation to stop. You have mastered the standards at the current level. But, an A at this level will be a B in the next level. A C after that, and so on. Don’t stop at mastery.

When someone is excelling, (s)he is accomplishing more and/or performing on a higher level than those who only have the foundational skills. For a quarter of students, this is unacceptable. The other 75%? This is pretty awesome–which it truly is! Most teachers are proud of B-level students because they tend to be those with more motivation to do better and take action when struggling. Though this may not be the case for every student, that is the general demographic.

B-level grades are awesome! They mean you will have an equal opportunity in society’s arena and the drive to succeed by your own standards and abilities.

When someone is proficient, (s)he can do the foundational skills needed. This is the “average” standard for everyone because everyone can enter the arena with equal opportunity. For a quarter of students, this is unacceptable. Another quarter feels it’s an accomplishment. The last half thinks it’s good enough. Most teachers don’t worry about C students because we know that on some level, they are performing accordingly–no matter their effort.

C-level grades are not bad! They merely mean that you will have an equal opportunity to succeed in society because you’ll be able to at least do what they can.

When someone is approaching average, (s)he is barely missing the mark for foundational skills needed. This is below the average standard. For a quarter of students, this is good enough.  This is an accomplishment for a quarter of students. For the other half, this feels likes death! Though this is below the “average standard”, it does not mean this person will struggle much more than average. Actually, the gap may not be much, and this person has only a few weaknesses that can be strengthened.

D-level grades are a struggle. When you get into the societal arena, you will have to work a little harder. What’s lovely though is that you will most likely close the gap and be at average standard quickly if you push at it.

When someone is struggling, (s)he is in need of great help to achieve even the basics. This is a red-flag to students and teachers alike. To 90% of students, this is not allowed. For the other 10%, they take for granted the consequences and don’t quite care. Though this is considered “failing”, it does not mean the person is a failure. Instead, it means that the standards have not been met, and intervention is needed. F’s can be changed 98% of the time. If they cannot, there may be special considerations that need to be made about what is best for the student.

When entering society, it will be much more complicated and stressful for someone to succeed when trying to do what many others will try to do. (S)he will have other skills to rely on to make it, but a traditional path will probably not be as easy.

If you receive an F, don’t despair and take it as an indicator that you’re “dumb”. Instead, see it as a measure of where you need to change it up so you can do better.

So, basically, I’m awesome, I’m mediocre, or I suck? That’s basically it?

Not at all! Each means that there are strengths you have and weaknesses. The grades are a concrete way for you to see where you need to work and where you are awesome. Instead of seeing it as an indicator of failure, view it as a radar to help you monitor your progress. Grades change all the time. Just because one grade is an F doesn’t mean you can’t get B’s. If anything, if you do have an F, you should be shooting for a C. Get help and push yourself rather than settling.

Whether you agree with these interpretations or not depends on you.

I just know, from a teacher’s perspective, we try to see grades as a way to help our students push themselves. Unfortunately, though, we see it more often promote negative behaviors in students. Not much we can do there but provide tools to shoot for the grade you want. Take it as you will.

So, how do you feel about grades? What do you feel we could do to make grades more helpful than harmful? Do you have any questions about the system? Let me know below.

Also, share the love on social media, connect with me, and sign up for muh newsletter if you want more philosophical wisdom.