These are key character details that affect our writing and how the readers will then connect and understand the character.

Did you know that characters are representations of what we perceive as humans (even when they aren’t)?

Oh, I do. Crazy, right? This also means that everything–for the most part–that applies to humans will apply to fictional characters, too.

Must everything be so complicated?

Yes. It must…Just kidding. It seems more complicated than what it is. There are four main ways that we come to understand a person when you think about it. Because of that, writers should use the same four things–sprinkled throughout the story–to help us understand their characters. Well, if the characters are human-like.

If you can get these four things down, you’ll develop those dynamic and rounded characters the reader needs to live a new life for the next however many pages.

The physical features of your character that the audience can experience with imagery.

“He was exactly seven feet tall. / The rest of Harrison’s appearance was Halloween and hardware. Nobody had ever born heavier handicaps. He had outgrown hindrances faster than the H-G men could think them up. Instead of a little ear radio for a mental handicap, he wore a tremendous pair of earphones and spectacles with thick wavy lenses. The spectacles were intended to make him not only half blind but to give him whanging headaches besides. / Scrap metal was hung all over him. Ordinarily, there was a certain symmetry, a military neatness to the handicaps issued to strong people, but Harrison looked like a walking junkyard. In the race of life, Harrison carried three hundred pounds” (Vonnegut “Harrison Bergeron”).

Knowing what a character looks like can help us to better imagine the character and make sense of your descriptions. And, though we may not like it, it also helps us build expectations of the character that will be reinforced or defeated through the writing.

Harrison’s physical appearance, without even knowing anything about him personally, really gives us a sense of his role in the story. He’s obviously different in a place that is all the same. We needed that description to understand why Harrison is so special to this story and the conflict to come.

Even though we can’t physically resemble him, we can still connect to him. He looks so different. For those of us who feel like we look so different from the rest of society, we can identify with him. Being ostracized, being weighed down, all because we look different. Just that small physical description adds so many layers to the story. It invites us into the world he’s created.

The conversations between characters internally and externally.

“I felt Calpurnia’s hand dig into my shoulder. ‘What you want, Lula?’ she asked, in tones I had never heard her use. She spoke quietly, contemptuously.

‘I wants to know why you bringin‘ white chillun to nigger church.’

‘They’s my comp’ny,’ said Calpurnia. Again I thought her voice strange: she was talking like the rest of them.” Chapter 12 of To Kill a Mockingbird

When someone speaks, it tells us so much about the person. Even in only a few words. Accent can verify childhood location/ethnicity. Tone can demonstrate emotion. Choice of words (diction) can reveal personality traits. A good writer can show all of these when the character speaks. The differences between internal (thoughts) and external (speaking) dialogue can also show a bit about the character, too.

Scout’s thoughts about Calpurnia’s change in speech really tells us something about Scout’s innocence when it comes to adult personas. She sees everyone as static and suddenly learns that people are more dynamic and complex than she thought. Calpurnia’s change in speech pattern and tone also says something about her and her associations. She speaks differently depending on her company. So, she feels pressured to be a certain person and is constantly suppressing her true self.

When characters talk about your character, we learn just as much. Just like when someone describes a friend to you, we learn about characters by what other characters say.

Actions include the character’s physical doings, as well as his/her state of being and decisions (s)he makes.

In the Hunger Games, Katniss knows that only one person can survive at the end of the games. Yet, when she encounters a child contestant who reminds her of her little sister, she decides to spare her and they work together to survive.

What a character does helps in two ways: (1) we can connect to him/her based on whether we would do the same or not; (2) we can live through a character through situations we wouldn’t face. The actions carried out become the live action of the movie in our heads as we read.

Katniss’s decision to partner with the little girl is a huge risk. It shows us how much she loves her sister, and also her soft heart. She sympathizes and empathizes with this girl. But, her clouded perception makes it harder later because she ignores the later implications. Her kindness would be her downfall if she had to be the one to kill the girl in the end to win the games.

Characters with contrasting features that juxtapose and make obvious the protagonist’s characterization.

In Of Mice and Men, the two protagonists are obvious opposites of one another. One is smart, the other is slow. The bigger one is docile, and the smaller one is aggressive. They don’t really have anything in common except their acquaintances. Because of this, we can distinctly distinguish between which is which because they are so different from one another.

Having characters that are almost opposites of your main characters help the reader to notice certain traits. If there is something key that captures who your character is, you want those to stand out. Most likely, those features are what will drive the character’s actions and the reader’s connection throughout the conflict.

Steinbeck’s juxtaposition of the characters really makes our little time with the characters very vivid. Just by the two being so different, we start to zero in on key features that later make a huge difference. Like, the fact that Lennie is not only big but slow makes us suspect that he’s probably stronger than he realizes. Our conceptions about little guys, especially when around bigger guys, leads us to assume George will be a firecracker because of feelings of inadequacy. And, guess what, we’re exactly right. Though it may feel like a template, it serves its purpose to foreshadow the conflict and keep us engaged. We want to see if we are right. You have an option to fulfill that or throw us in a loop with a twist. 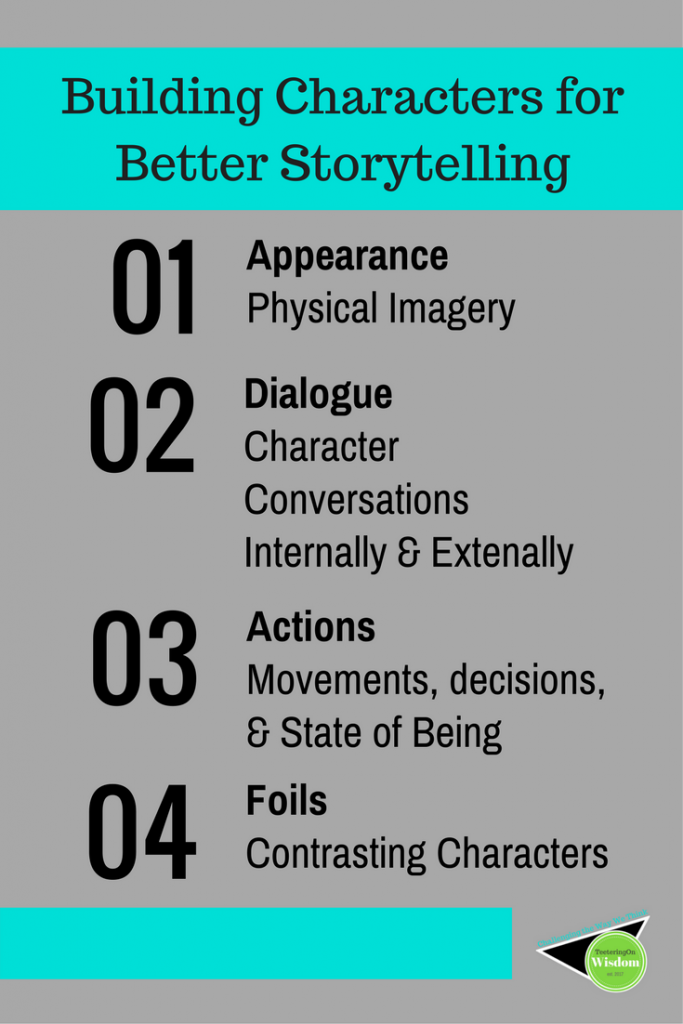 It’s so mind-boggling when I encounter flat and static characters.

There are so many ways to develop a character. And, if the character is really being opposed by the conflict and antagonist, they will naturally develop and evolve. Don’t be afraid to experiment with character features, tropes, and archetypes. Even if it seems cliche, if you can use it as a base, it’s okay. The conflict should change them up throughout the story and your character will be a true person.

Other than that, how are you feeling about characters? What else do you think can be used to develop a character? What makes a good character in your eyes when you read?

Comment about it below or when you follow me on social media! While you’re at it, check out the other articles in the storytelling series. Plus, sign up for my bi-weekly Writer’s Wisdom newsletter for free access to workbooks and handouts, including the plot organization workbook.