As teachers, we strive to get students to perform at the highest level of the pedagogical taxonomy. Personally, I follow Bloom’s and cross-reference with Maslow’s psychological needs hierarchy.

It’s complicated. I’ll hit that another time. Anyway, the point is that we are constantly trying to get the kids to think in more sophisticated ways that don’t come naturally to them, most of the time. This is a very beautiful thing and helps our students to better understand topics on deeper levels. But, I found…

…students won’t notice anything more than the superficial until we point it out to them.

Thus, they associate only “adult” things as that complicated and learn to hate them just because they know it’ll be more work to understand.

Example: to this day, I still can’t stand The Great Gastby—historically, one of the most preferred classics among teens—because all I remember of the story is the list of symbols, motifs, and context shoved down my throat about it. I couldn’t enjoy it for what it was showing me because it is so “well crafted”, I have to notice every little detail to “truly appreciate the story”. The same is pushed with Shakespeare, which kills the story’s beauty for most students.

Well, you’re telling them there are all kinds of things to notice, then telling them to notice it. Or, you give them the answer and ask them how it is the answer. Both are good strategies, but that doesn’t mean they can do it—let alone want to! I’m all honesty, no matter how easy it is to detect something, if they don’t want to do it, they’ll have blinders on.

My solution: start with childhood favorites.

As an adult, have you ever read or watched something from your childhood and suddenly realized how messed up it all was? Think, Looney Toons, Tom & Jerry, everything from Warner Bros. cartoons, everything from Cartoon Network, even Popeye, Disney originals, and so forth were so naughty!

Because you enjoy the stories, you already know them well. Because you like them and understand them, it comes much easier for you to pick up on the nuances you missed because you lacked exposure and experience. Now it’s all making sense.

Do that with your students while training them with new or arduous skills. Personally, I preferred Dr. Seuss in my classroom. Here’s what I used… 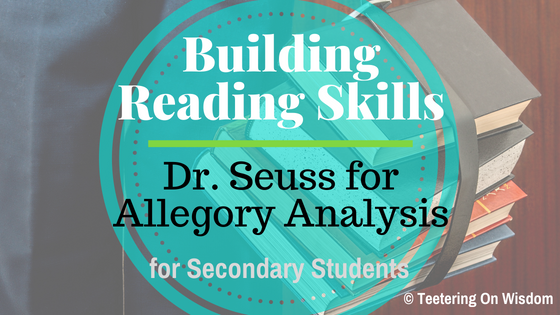 When doing a dystopia unit with my sophomores, I brought in the following books from Dr. Seuss to study allegory:

Majority of these are familiar to the kids, and they rotated the books around, taking turns reading to one another and showing the pictures like they remember from younger grades. They loved it so much and it brought down some walls before I pushed them into that deeper analysis of stories they thought were so simple.

I told them that each revealed something awful about society in it.

Some of them were easy to identify for them. The Lorax and environmentalism; the Grinch and materialism. Those are movies now, so they get it. But, what about the others.

I had multiple students come forward with different interpretations about The Cat in the Hat that shocked myself and their classmates. I’m not going to give their analysis on their conclusions; I’ll let you think them over.

Their classmates were baffled by how it can be any more than “when you make a mess, clean it up”.

Here’s the awesome part: I had each of those students come forward with the book, put it under the document camera, and show us how they drew their conclusions. They became experts who knew something the rest of us didn’t. Some of them even used paper to list and visualize their thought process (think aloud). Some even willingly shared their personal experiences with drugs, sexual abuse, and neglect to support how they connected to the story in a way they never thought about before. 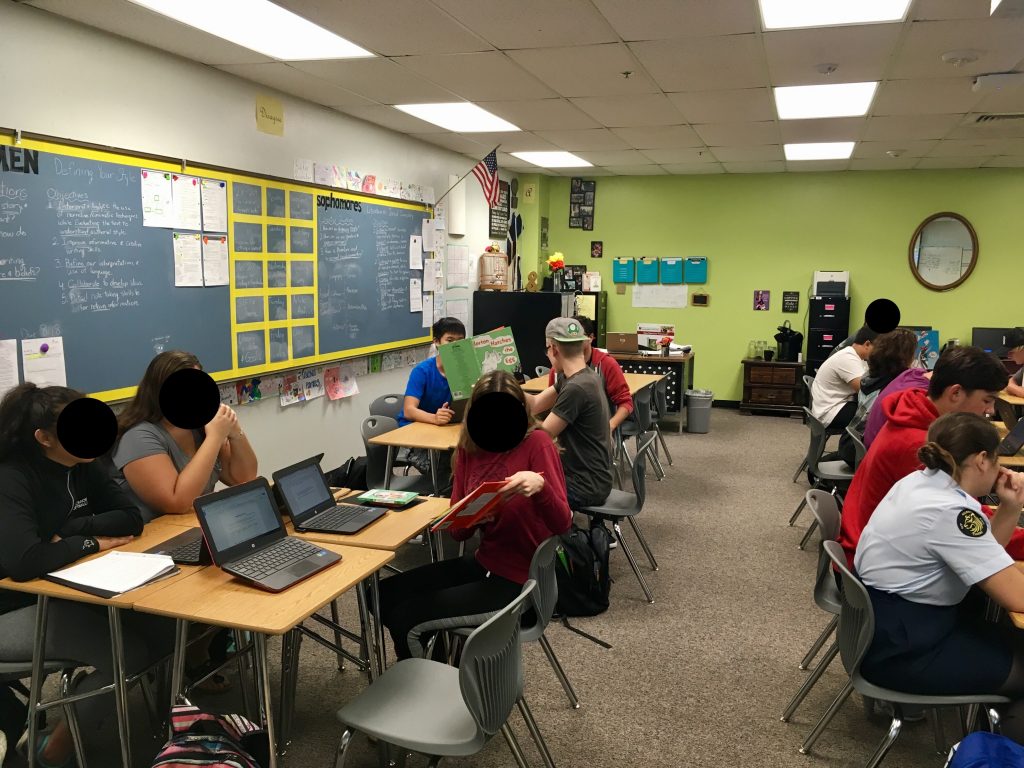 The sense of pride when they finished and we got it. I could see those gears turning around the room—some of them breaking through rust!

I won’t give you the whole lesson plan here, but essentially. By the end of the 50 minutes, the lightbulbs in most of their eyes were bright. The next day, they turned in analysis paragraphs, with paraphrased evidence from the stories about their theories. It was amazing how many of them picked up on the allusions, allegories, symbols, motifs, and themes–without my direct instruction. It was a huge success.

They were proud, I was proud.

Something manageable, something comfortable, something that allows them to develop confidence in the skills before applying it to such large stories. I can’t definitively say this worked for every, single student. Some have barriers and deficiencies that would still need more scaffolding; however, I could say the class success average between the two periods was about 80%, based on their paragraphs (graded on content, only). That’s high for analysis writing in September!

It’s worth a try, based on my experience.

Share your experience and feedback below if you use it in your classroom. Plus, I’d love to hear your strategies for similar scaffolding. Drop a comment below or when you follow me on social media.