4 Things to Remember When Someone Doesn’t Like Your Writing

“...You can (1) cater to everyone's opinion and then you'll have a bland book written by committee, or (2) you can adjust a little here and there simply to make it more marketable or (3) you can decide to write what you please and damn the rest. You do what works best for you. I suggest you go with either option 2 or 3, because you cannot please everybody.”

I’ve been working on a darling little romance novella about two pets who become human. It really makes you think about what it means to be human and I feel so accomplished working on it. Well, in the story, they are adults but have the mentality of children. For that reason, they are VERY literal. Makes sense. Pets are like toddlers and children; they learn as they go through the book. Well, I asked a couple of friends to read a chapter for me and all of them immediately interpreted it as mocking multiple demographics. The characters were doing adult things but speaking in broken English and exploring it like children. Essentially, they thought the characters were moderately mentally-challenged English language learners.

But, wh— what the hell are you writing?!

It’s complicated. Anyway, what I intended in my writing and what was interpreted were drastically different. It worried so much that I actually stopped writing and abandoned the project for a while.

I was heartbroken. So, I reached out my writing communities.

They really tried to figure out how to help me rework my WIP and gave me great ideas. But they encouraged me to never give up my story and it really challenged me to think like an author who will face adversity in such a politically correct world. That’s what I want to share with you. 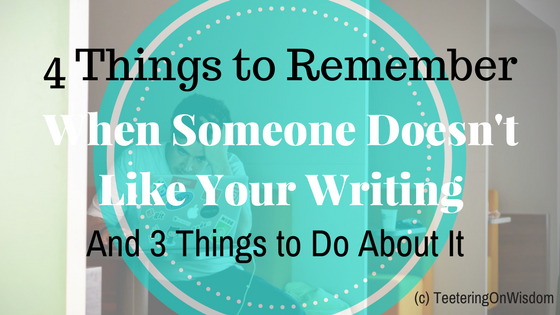 The quotes I’ve included in this article are from real people from my Google+ Writing Communities. They are awesome people, but I do not represent or sponsor them or their beliefs at all. Their words are included here for example purposes, but anything said beyond what is below is not representative or me or the TeeteringOnWisdom brand by any means. Read my full disclosure here.

Everyone Has Different Tastes and Preferences.

My input is this: we read every book from our perspective. We are who we are where we are at that given point in time! Life is often times controversial but only because of how we are perceiving it! You can only control the words you put down on paper, every reader comes to it with their own personality intact! It’s the wonderful thing about life no two people are the same! Don’t let it discourage but to encourage.

Someone Out There Loves Your Writing as Much as Others Hate It.

Controversy makes the reader involved emotionally in what you have written.  If you don’t preach or give an opinion then the reader has to question their own thoughts, values etc.

You Can’t Please Everyone.

There is conflict everywhere, and controversy to be had in everything. You shouldn’t shy away from it just because it might hit a nerve. However, you should tread carefully as well. And you have to show ALL points of the controversy, not just one. Make sure that the book highlights everything involved and then, don’t fall on one side or the other of the argument. Leave that to your readers to decide. If it has been presented with all sides of the controversy given equal voices, you should be fine.

Your Story is a Story That Only You Can Tell. It’s Your Work and Your Heartfelt Contribution to Humanity.

Oh, never stop. Sometimes people don’t understand an author’s creative genius. Never stop creating. Learn a little from each critique as you go along, and remember your book belongs to you.

Never give up 🙂 Just write as you are feeling it. That’s how you give your readers the best you can.

I would keep with it! If the characters and story are still following you, I would honor the process. Make changes where your heart tells you to.

They were so awesome and eventually, I decided to keep on, as you should do. I found that I couldn’t please everyone with my writing. But, as long as I know what I’m trying to say and to whom, I could make my writing better and appeal them. Try this…

Reconsider and Pinpoint Your Audience, Then Adjust Accordingly.

Having said that, if the majority of people are reading the same pieces and are getting pinged by the same things, it may require a different approach to how you handle the subject matter, not that the subject matter is wrong. Sometimes it can be tweaking dialogue, and sometimes it means a complete restructuring of how you present scenes.

I don’t suggest quitting though. Ever. We adapt, learn, grow, tweak, edit, tweak some more, edit some more, and write again.”

Read More From the Similar Books to See How Other Authors Handle It.

Damn, right I am! I can do some awesome things when inspired myself. We all get there where we will encounter opposition, but we can’t let it discourage us. I think I really would have quit if it hadn’t been for my writing community (make sure you find yours, by the way).

*Clears throat* Have you ever felt discouraged with your beta readers? What else should we consider with disgruntled readers? Let us know below and on social media. Also, don’t forget to sign up for some Writer’s Wisdom every other week with muh newsletter!