35+ Scenes You Need Based on Characters

It all makes sense now. I’ve got it all figured out.

I was over at the Better Novel Project blog and reading this article, 9 Surprising Reasons You Need 20 Characters to Start a Book. As I read it, I worked through it in my writer’s notebook. After figuring out my (20 characters), my story just started flowing. The article got me to think about those little people I would ignore until they came out. (You know, the ones who you mention once and never again, or the ones who should be important, but you forgot about them.) It forced me to keep it simple but detailed in thought to make sure everyone was usable and less likely to be cut when I get to my revision and editing.

I really do recommend you read it and list out your characters, as well.

It’s amazing how it’s so simple, yet helps you to develop the more complicated parts of the plot. How? That’s the part I’m going to do with you here.

For each character, there are specific scenes that should be included to establish the correct relationship between the characters. Though these are not the only ones, they are surely a start. And, for those of you doing NaNoWriMo, you really need that start when November 1st rolls around! 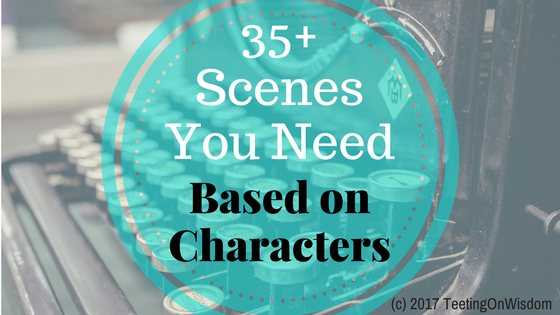 Now, I don’t know how to make a fancy chart on this face interface. Not even gonna lie to ya. However, I’m excellent at organizing. So, for each character type (9), I’m going to suggest some scenes you should have to better characterize your story. You can read about each character, his/her role in the story, and pop culture examples on the original article.

(These characters come and go as needed throughout the story. They are not really reoccurring.)

The scenes don’t have to be in this order. Really, you may not even need all of these scenes. They’re mostly based on the character’s roles presented in Frazier’s article and on Joseph Campbell’s “hero’s journey”. Take what you need and delete what you want. Remember, this is a start of the basics. If you can get these scenes in, you’re in a good place and your word count is definitely kicking in a good gear for NaNoWriMo!

So, are there any scenes that I missed? What other scenes do you think we should include for character relationships? Let us know below and on social media. If you’re still trying to work out your plot, I recommend you download my free workbook that walks you from the original ideas to the first major plot points of your story. Get the password for access by signing up for my bi-weekly Writer’s Wisdom newsletter.