The Only 7 Writing Rules You’ll Ever Need

Everyone has something to say about it.

If you go onto Pinterest or even just Google tips for writing, you’ll be bombarded by everyone’s take on how to be a better writer. While each has a unique idea, the more than not are just repeating what everyone else has said, too. I find that is the case with professional writers, too. I’ve done some research and found lists and infographics of writing tips from the big leagues. Despite each of them writing such different books during different times, they also say a lot of the same things, as well.

I started cross-referencing each. Yeah, I sat down, hand wrote EACH rule (because I like it the old-fashioned way) and developed a key to mark the text where I found similarities (it’s the teacher in me). I found rules that directly contradicted one another. But, I also found different ones that matched up. These are the ones I felt were true to being a writer. From writers in the 60s to current writers, there are some things that just don’t change.

Those are the lessons we need as writers.

So, I present to you, the true writing tips from the professionals, including Stephen King, William Goldman, Pixar’s Emma Coats, Kurt Vonnegut, Joss Whedon, Neil Gaiman, and George Orwell*.

*Find the original rules and infographics on my “For Writers” Pinterest board.

…even when you’re stuck or tempted to change things. When our writing mojo starts to fizzle out, we tend to go back and start changing things as a way to stay productive. There are even more times when we write something and obsess about what all is wrong with it. No matter the situation, keep writing. Ignore the perfectionism, ignore the writer’s block (write crap and change it later), ignore the negativity. Don’t stop writing it. I would say that Emma Coats says it best:

Finish your story, let go, even if it’s not perfect. In an ideal world, you have both, but move on. Do better next time.

…no matter how innocent they are. We may have a general idea of what conflict and obstacles we want to throw at our characters, but human empathy limits us. However, the best of us come from the worst backgrounds. It may feel mean, but “thou shalt not make life easy for the protagonist,” as William Goldman suggests. If you really want us to love your character, you have to do as Kurt Vonnegut says:

Be a sadist. No matter how sweet and innocent your leading characters, make awful things happen to them–in order that the reader may see what they are made of.

…because fancy is only distracting. Now, this one is all over the place. Of course, you’re always taught to include figurative language in creative writing. And, you definitely want to create a mood for your readers with the imagery and such. However, a few of the writers insisted that you shouldn’t use big words, specific words, multiple words that can be explained with one. While I get that, we run into problems like describing ‘warmly’ versus just saying it; because you should never use adverbs. Nevertheless, from Orwell to King, they all agree that you should keep your language simple. Kurt Vonnegut insists:

Say what you mean. You should avoid Picasso-style or jazz-style writing if you have something worth saying and wish to be understood.

Write What You Feel Needs to be Told

…because it’s worth hearing. While only one outright said it, all the writers implied the idea that we write because we have a story to tell. We write because someone needs to read it. We write because that’s what we love and want others to love it, too. It couldn’t be more true. Don’t worry about the world, don’t worry about their reactions. In America, we take for granted how precious speaking is. We never stop doing it that we forget having a voice–in any capacity–is a gift. As writers, writing is our voice. You have a voice, you have a writing utensil. Emma Coats asks:

Why must you tell THIS story? What’s the belief burning within you that you story feeds off of? That’s the heart of it.

Write for a One-Person Audience

…not for the world. I had to laugh when I read Vonnegut’s abstract metaphor of getting pneumonia by “making love to the world”. He confused me with that one, but the others addressed the same thing. Their ways made more sense. Basically, you’re never going to make every reader happy. You’ll have people who are required to read it, pressured to read it, others who will criticize it, and others where it’s just not their style. That shouldn’t stop you from telling your story. In the same way, you’ll have those who praise it, live by it, create a following, buy all your work, and recommend it to others. You can’t worry about any of them. Write for one person who you think would give your story a chance. Don’t worry about anyone else. Stephen King recommends you:

Call that one person you write for ‘ideal reader’. He or she is going to be in your writing room all the time.

Cut What You Don’t Need

…no matter how much it hurts. Like Coats says, “you’ll feel like you’re losing valuable stuff, but it sets you free.” As writers, our creations are our babies. Something that we “birthed”, so to speak, and raised on the pages the best way we know how. It’s hard to go back and cut those pieces out of our work, our lives. But, it has to happen. Majority of the authors suggested that you continue on with your work at any cost; then when you finally finish it after “abandon[ing] the idea that you are ever going to finish” (John Steinbeck), you go back and cut everything you don’t need. Just as it applies to life, no matter how much we love it and want it, when it comes down to what really matters in life, when you have to make decisions when things get rough, it’s only about what you need. Like Joss Whedon says:

Cut what you love.

Write with the End in Mind

…because it’s the only way you’ll get there. The endings are sometimes the hardest part. Some people don’t know where they want to end, others aren’t sure if they have or have not after so long. This is where you run into a problem. If you know where you want to end, in my opinion, I find it’s easy to just build up to that point. It’s like connecting the dots. Here’s where you start, here’s where you end, here’s your middle, then the little things in between. Emma Coats says it’s best to:

Come up with the ending before you figure out your middle. Seriously. Endings are hard, get yours working up front. 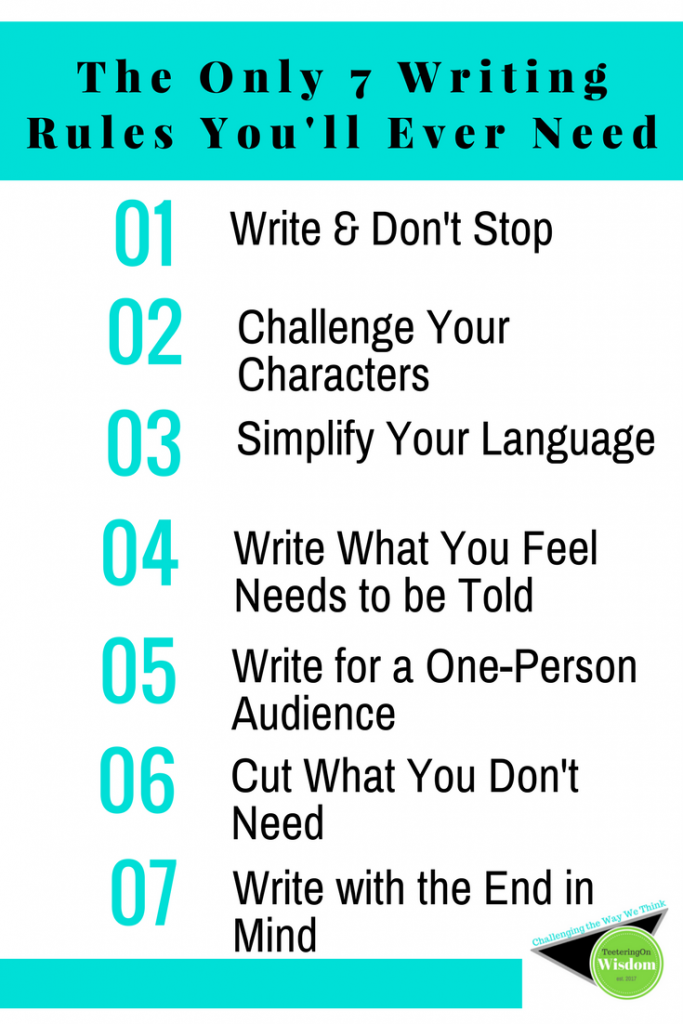 That’s all that really matters. There are so many little things that help you be a writer. But, time and time again, writers agree that these 7 are the steadfast rules by which you should write.

Let us know below and on social media. Plus, don’t forget to sign up for the Writer’s Wisdom bi-weekly newsletter anywhere on this page. Get access to writing tips, tricks, prompts, and resources for free!