When I taught Romeo & Juliet to my 9th graders every year, I was disappointed that I could never let them listen to the 90’s soundtrack to the Leonard DiCaprio movie version of the play. The songs so accurately reflect the story and help us to connect to the characters in a modernized and engaging way. Nevertheless, the cursing made it a no-no because parents are still sensitive to their kids hearing the word f*ck in class, but not to them repeating the word n*gger with their friends. You know, the basics.

Anyway, every year around that unit, I would listen to it on repeat to get a refreshing sense of how to best depict the story to the kids. How can I best illustrate the conflicts and characterization in a way that a teenager would understand? What are some things that I am not drawing from the text that this music capitalizes and makes obvious to us all? It never failed to work and help me better teach.

Music helps me better understand character and conflict intricacies, just as it helps me to understand myself–especially as a teen.

Listening to one of my favorite songs at the time, I pictured my WIP’s protagonist sulking to the same music. The song seemed to speak to the character’s soul and help me write the perfect scene to depict that mood. Suddenly, I found myself creating a whole novel soundtrack playlist for me to immerse myself in the novel’s mood and emotions throughout the story. When I write certain parts of the book, I turn on the appropriate songs to help me map out the scene according to the notes and lyrics of the music that easily paints the picture in my head like a music video.

So, that’s what I’m going to help you do. 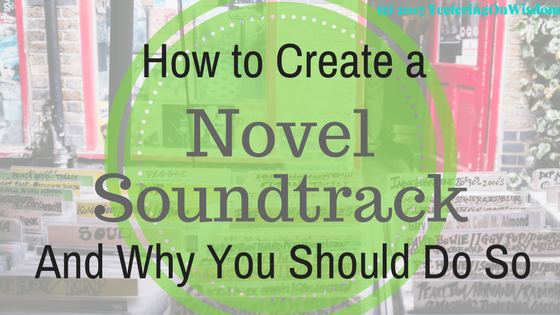 In this particular article, we’re going to focus on how to choose the right songs. Don’t let genre hold you back; every genre has a song to offer that matches your character and conflicts–just explore. Nevertheless, you should pick songs for the following things:

You know how all our favorite video game characters have theme songs attached to them? And, like, as soon as that character enters the frame, the music changes to match? Yeah, your characters need that. You need three theme songs that capture your major characters’ personalities in the beginning, middle, and end of the book. Not songs for their back stories, songs that when you hear them play, you know which character is about to enter the scene.

This can help give insight into the character just based on how a beat and rhythm builds a mood.

Okay, in the movies, you usually have this point at which there is no real dialogue between the characters, but you just watch them live while music plays to describe how they’re feeling. Think, like, the songs that play while we watch the couple live and react after the breakup. You want that, too. You want to have songs that follow up the reaction and emotion set by a particularly intense and integral scene.

The song should be able to play over the scene and we learn everything we need to know about the characters without them directly interacting with anyone.

Many movies have times when they’re just driving, or just walking, or things like that. Nothing major is really happening, it’s usually a long shot from the characters directly, and time passes in the duration of the song. Basically, it’s a transition and the music helps to create a mood that captures character feelings overall during this time frame.

If you have points in the story when the time is passing or you skip time, these are the songs that would fit in there.

At the beginning and the end, you typically have a song that captures the story overall. If you had a cast introduction to your novel, what song would you choose to introduce the tone of the story? How do you want us to feel when we start those first few pages? How should we be thinking about it? The same goes for the end credits. After all of that, how should we remember this story? What song do you think captures the whole mood of the story in the end, after we know everything?

These are basically the theme songs that would be associated with the overall story. It’s just like the songs you always remember when you see a movie. This is how you want your audience to feel about your story.

What’s lovely is there isn’t a limit on how many songs you use for your soundtrack. Nor do they have to be consistent genre or artists. As long as the songs fit the mood and tone you’re trying to develop, you’re on point. It really does help you to get into your writing zone, too.

You immerse yourself in the story’s atmosphere and the projector in your head starts the film. From there, you just write down what’s playing behind your eyes.

Is that making sense? What songs would you choose for your novel soundtrack? What are some good soundtrack examples you think captures the essence of a story when you listen to it? Fill us in below. And, don’t forget to follow me on social media to find out the songs I’ve chosen for my current WIP! The bi-weekly newsletter has even more writing tips and tricks to offer, as well.