Movies That Should Be Books, Part 3

Hello, there, again! If you’ve made it to part three of this series, I’m flattered that you’re probably liking my movie interpretations. You probably know already that I have a knack for reading movies like books. I don’t know what it is, but everything is a story to me. I can look at the simplest thing and come up with an entire series based on it. It’s a gift and a curse, really…

Anyway, I’ve expanded my searches to Amazon Prime and Hulu, since Netflix isn’t as movie-abundant anymore. Of course, I’m still into the horror movies more than anything. I promise, though, I will eventually expand! Until then, here are the next four movies that should be books. 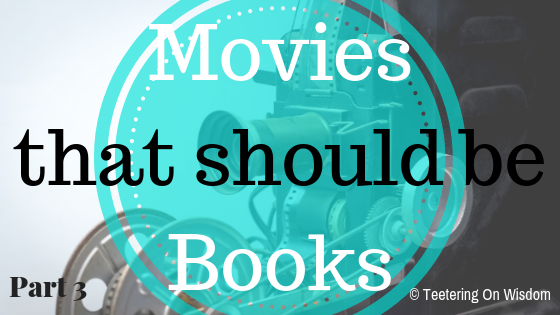 Another zombie movie. But! This one has some interesting story on the actual substance that changes the people.

A small-town strip club owner defends her bar and her girls when they’re beset by the undead.

Each character seems rich with personality and purpose in the story. Plus, the family subplot is well-hidden, but hinted, throughout the movie consistently. It makes you want to learn more, but we don’t ever get it. Nevertheless, the science involved with the creatures and their defeat is awesome; not to mention the protagonist is badass!

This movie is quite amusing. And, what’s more classic than the outcast demon hunter in a great hat?

When an ancient evil is unleashed in a small Mississippi town, it leaves a trail of death and destruction as it passes from host to host. The only hope of survival lies with a grizzled demon hunter who has faced this terror before. With the help of a reluctant FBI agent, he must figure out how to destroy a demon that has the ability to possess its killer.

Our anti-hero is full of sass and background. A little typical in development, but it still works in collaboration with our other protagonist. Her character is a little weak, though her backstory is interesting. However, her involvement in the whole thing is flimsy at times. As a book, this can be ironed out so it won’t complicate it too much for no reason. You can only really have so many effective flashbacks and dreams in a movie.

I really like the ancient and “pagan-like” implications of this movie. A mother-to-be myself, I think I connected with it.

An injured hunter and a married couple are trapped inside a claustrophobic tent by a supernatural threat.

I like the character development and relationships in this one. I love the myth and suspense, too. But, I found it was hard to fully grasp the whole story of the demons. Plus, the hunter’s family addition to the story confused me a little, as well. Of course, things like that can be better sorted out in written form because there’s an opportunity for inner dialogue and reflection that would be perfect with our female protagonist–especially toward the end.

I couldn’t get enough of this movie! It had me reeling from beginning to end with all the possibilities.

During a food shortage[,] a survivalist lives off of a small plot of land in the forest. When two women show up looking for food and shelter, his existence is threatened.

While we could tell it is post-apocalyptic, we only get a hint at what causes it with the introductory graph. The suspense is constant, and though quiet, the characters, plot, and subplot are well-embedded throughout the story. It did end satisfactorily, but I still feel like I wanted more to better connect with our protagonist. He does have dreams and flashbacks, but he needs more dialogue.

See, at least the last one wasn’t a horror movie!

While I do get story variety between the movies, shows, and books I read, writing something completely opposite of what I usually do will probably make me a better writer. I advise you consider the same and take a second (or third) look at your favorite movies for writing inspiration.

Have you ever seen a movie and wondered more about it? Or, even watched one that inspired you to write a similar story?

Tell us all about it in the comments and on social media. And, for the writer in you, sign up for the bi-weekly Writer’s Wisdom Newsletter for free resources, tips, updates, and other exclusives for subscribers.